Is There a 'Pot of Gold at the End of the Rainbow'?

And now, welcome to Words and Their Stories.

On March 17 in many places around the world, people celebrate Saint Patrick's Day.

Encyclopedia Britannica says St. Patrick is the patron saint of Ireland. "Born in Roman Britain in the late 4th century, he was kidnapped at the age of 16 and taken to Ireland as a slave. He escaped but returned to convert the Irish to Christianity."

Decorations usually include green four-leaf clovers. The small plants are said to bring good luck. Another decoration is the Leprechaun. A Leprechaun is a trouble making creature in old Irish stories. He looks like a very small man. And he knows where to find gold.

Some experts say that, in Irish folklore, it is believed that Leprechauns can reveal the hiding places of treasures.

The Encyclopedia Britannica explains that as far back as the 17th century the Irish would say a person "was as likely to find a pot of gold as to find the end of a rainbow." A colorful rainbow appears in the sky when the sun shines through water droplets. 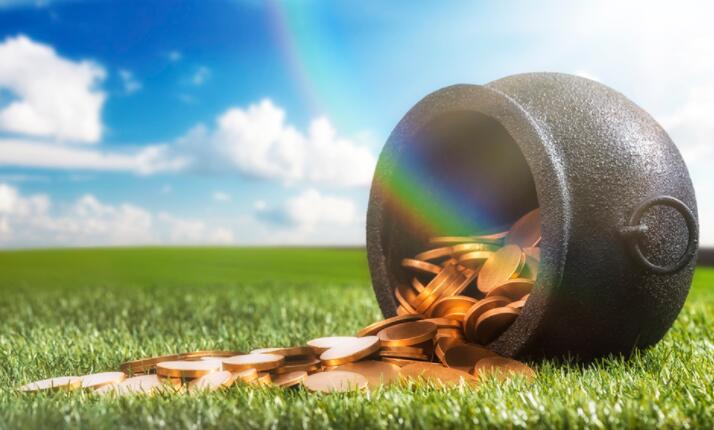 Keep in mind that there is no real "end" to a rainbow. And that brings us to our idiom: the pot of gold at the end of the rainbow.

For example, let's say someone loves animals and hopes to live out in the country. They could describe their pot of gold at the end of the rainbow as a owning a working farm with cows, horses, dogs and goats!

Finding the pot of gold at the end of the rainbow can also be used to talk about actual money. When we use it this way, we usually mean that wealth has come suddenly. It means you have come into a huge windfall – which means a lot of money! For example, I found my pot of gold after winning the lottery! But sadly, that is just an example.

However, finding your pot of gold may not be likely or even possible. Because of the unrealistic nature of the pot of gold, this expression is often used in the negative form.

For example, a friend of mine was always unhappy. She moved a lot looking for happiness. Her father told her that she was looking for a pot of gold at the end of the rainbow. "It doesn't exist," he warned. "You must find a way to be happy wherever you are." But she ended up moving anyway. Some lessons we have to learn on our own.

And that's all the time we have for this Words and Their Stories. Until next time...